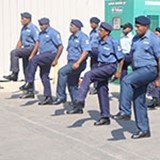 In the continued effort to the upskill and strengthen security personal, BSP and RPNG have continued to work in close partnership as part of the Memorandum of Agreement between the RPNGC and BSP since 2000.

Mr Van der Poll when inspecting the officers during the parade said, "It was not only the bank's commitment but a personal commitment they made to the Royal Papua New Guinea Constabulary and the bank to uphold the law, protect the community and its properties."

He said, security was an integral part of the BSP's operations and the bank has a long standing partnership with the RPNGC and we're pleased that we continue to support the RPNGC.