Setbacks and defeats will come on the journey to achieving your dreams and career path. At such times, patience is what is required. 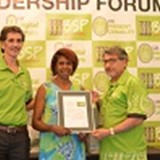 These were the words from Wemaloo Nagari- Team Leader- BSP Transaction Channel Support when receiving her silver jubilee awards as a long service staff of the bank.

She was a grade 10 school leaver, and thought she could never make it in life with a successful job that can take care of family. But it was all an absurd thought.

After finding her way through to complete her 1 year training at Rabaul College (Known as RabsCol), she joined the bank in 1992 starting as a Batch officer.

"It has been a long and rough journey for me but patience is what we all need," Wemaloo stated.

"I am grateful for the organisation for offering me a job that aids me to supports my family, especially my children school fees," she said.

"I received my first promotion in 2007 when I was promoted to Branch Training Officer. From then,   doors began to open in my career when I was appointed the same position at NCD Operations Centre - now teaming up with Transaction & Channel Support," she said.

The Banks Management was good and my efforts were recognised as I was given opportunities to move and perform more challenging tasks. I couldn't thank the green bank enough of what it has done to me and my family.

Between all of the mentors, managers, inspirational leaders, and support staff - I could not have pursued in my career over this 25 years while simultaneously building my professional skill set if it were not for them.

"I have sacrificed alot, even when I left school and started looking for jobs I almost gave up all hopes. I recalled sending countless applications to companies and departments. I almost gave up because I felt hopeless, sad and deflated," she said.

I am grateful to the bank for its recognition of my service and plead to everyone, "Don't give up! When people say, "When life gives you lemons, make lemonade," I would say " Squeeze the lemons" do not sweeten your circumstances but push through them. You can do it and even if it takes 12 months and a thousand applications, do not give up. Always have patience in whatever you do."