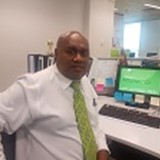 "After all these years, I still love my job. Feels like I have found a home."

John Posikei recently celebrated his 25 years of service to Bank South Pacific since started in 1992.

If anyone would ask me why I decided to stick with the bank for this long, I would say, "I love my job and my employer. My job in the bank has exposed me to many things in life and has helped me to live life successfully.

"When I was finishing school, I didn't know what I wanted to do with my life. Like a lot of undecided University students, I had lots of plans but almost all are default choices.

While I delay my decision about what to do, I applied and joined the bank as a Customer Service Clerk on November 9th, 1992, at the Kavieng Branch.

In September 2001, after 9 years in Kavieng branch, I was moved to Wewak Branch as a Telling Officer for a year, before moving to Port Moresby Branch as a Paramount Banking Teller.

From Paramount I joined the Credit team in 2004 where I worked till today.

Between those years of movements, I recalled one of the unforgettable changes in the bank that still lingers in my mind was in 2003 when I accompanied BSP Conversion Team to go around the country and merged the 35 PNGBC branches to BSP within 12 months despite critics from customers and citizens. This experience is still a part of me today where the change seemed to be a lasting memory of another big step forward for the bank and the country.

It has been 25 years, and this award is one of the greatest achievements in my career and life as a result of commitment and loyalty to my employer, Bank South Pacific.

"I would like to acknowledge God who is the source of wisdom and knowledge, my family who supports me and all my BSP colleagues whom I have worked along within these 25 years."

It has all payed off through hard work and honesty, as there is a GOD who is watching and will compensate accordingly at his own timing.

I'm glad I'm a banker! I love what I do; even we all need to accept the fact that there will be tasks in our jobs that we don't enjoy doing.

My latest roles in Credit include: