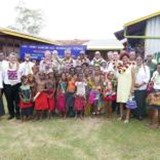 While in Madang over the weekend, BSP Board Members took the opportunity to visit the Madang Holy Spirit Elementary and Primary School to officially open the community project that had been undertaken by the staff of BSP Madang branch.

BSP Chairman Sir Kostas Constantinou OBE officiated at the opening and handover ceremony where he commended the school principal Gabriel Banglang, his staff and students for their assistance during the course of completion of the project which involved the installation of water tanks and taps for the students at the school.

Sir Kostas stated that this tangibly reflects BSP's commitment to our communities, one of BSP's core values. With schools such as Madang Elementary and Primary School, this is also one way in which BSP can contribute to the development and well-being of the future leaders of PNG.

The community projects undertaken by BSP, are executed through every branch in PNG and in every country that BSP operates in. The work is carried out by staff on a voluntary basis as their contribution to the community.

The Holy Spirit Elementary and Primary School, has supported BSP in its community initiatives and operates in the heart of Madang town. With over 2000 students attending school, the school administrations see the need to ensure that there is enough clean water to support the school population.