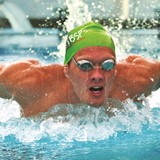 Papua New Guinea's swim sensation, Ryan Pini literally stop the nation and as we watched him splashed through to take out a Gold medal at the 2006 Commonwealth Games in Melbourne in 100m butterfly.

After completing secondary schooling at Port Moresby International School, Pini headed to Australia to study at Griffith University in Brisbane and in doing so continued with training at Yeronga Park under the guidance and expertise of Coach Rick Van Der Zant.

During the course of his time training and competing in Papua New Guinea, Pini got a real taste of what he could achieve when he took part in his first South Pacific Games in Guam in 1999 and received his first gold medal at this level of competition.

2006 Swam the swim leg in the Sepik Iron Man Competition hosted by the Prime Minister of PNG, relay team came in 1st place setting the record

Also in the same year, Pini received a Queen's Honour Award for Sport and was made an Honorary Member for the Civil Division of the Most Excellent Order of the British Empire (MBE).

"The most rewarding was winning a Gold medal at the 2006 Commonwealth Games in Melbourne in 100m butterfly and knowing that my whole country had stopped to watch the race was incredible."

"In 2006 I was awarded an MBE, presented by our Governor General from the Queen for my contribution to sport."

"Making a final berth in the 100m butterfly at the 2008 Beijing Olympic Games, swimming a personal best time and PNG Open record to do so."

"Another memorable moment was being recognised for my achievements through the SP Sports Awards. I received the first SP Sportsman of the Year Award in 2002, and then every after that until 2008 when I received a special outstanding achievement award as Sportsman of the year. These awards have exemplified my special love of swimming and competing for my country Papua New Guinea."